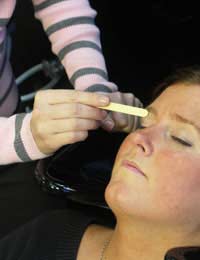 Sugaring is a hair-removal method which was formulated thousands of years ago and has been documented to be in use by even ancient civilisations such as Egyptian, Greek and Indian. Sugaring is becoming increasingly popular as more and more people all over the world are getting acquainted with the benefits of this age-old method of removing body hair.

Sugaring is a technique of hair-removal, involving the application of a paste made of sugar, lemon and water to remove body hair.

Sugaring is similar to waxing, but is less painful, easy to do at home, using natural, home-made products and is therefore a very cheap and convenient way of removing hair from anywhere on the body.

Some of the advantages include:

Where to Use Sugaring?

Sugaring can be used to remove hair from any part of the body, but is especially good for removing facial hair and hair from other sensitive areas like the bikini line because it can remove even fine hair like facial hair; it involves the use of more natural and less harmful products; and also there is less risk of skin irritation and burning, as the paste is not applied hot.

How to Prepare the Sugaring Paste?

One of the best things about sugaring is that the sugaring paste can be easily made at home using a few simple, natural ingredients. However, it may take some time before you become adept at preparing a mixture of the right consistency. If you wish, you can also buy the sugaring paste from any cosmetic shop.

The ingredients for the sugaring paste are:

Mix these ingredients and heat them either in a microwave or on a stove. It is easier to do it in a microwave, but, you need to be careful not to let the mixture get overheated as it heats up faster in a microwave. Microwave it for 2-3 minutes until it acquires a smooth, thick, syrupy consistency.

If you are preparing the sugaring mix over a stove, place the mixture over medium heat and boil until it becomes brownish-yellow and acquires the same consistency as mentioned above. The sugaring paste should neither be too thin nor too thick.

Then, just leave the mixture to cool for a few minutes and, lo and behold, the sugaring paste is ready! When you want to use it, warm it up just a bit to make it easier to apply.

It is better to store the sugaring paste in a re-heatable jar for easier use again. But, don’t prepare too much of the paste as it gets thicker with time, so it may not work as well if it has been kept for too long.

You will need a few fine cotton or paper strips that can be made at home and are also easily available at any cosmetic shop; a spatula, dull knife or tongue depressor-kind of thing, to apply the paste.

So, sugaring is really a sugary…umm...sweet method to remove those not so sweet body hairs. Hope you like the taste of it!

Are Photoepilators Better Than Tweezing?

What is Transcutaneous Hair Removal?